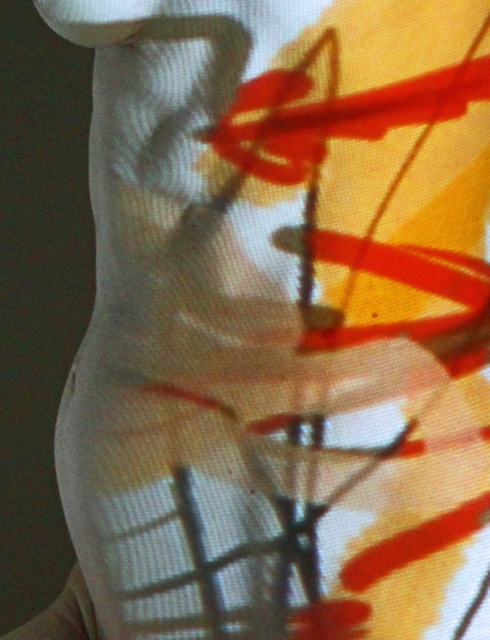 Another belly pic by Mike Little, from the second session with Trish his artist wife who projects her drawings onto me. According to the philosopher-semiotician Saussure (says Trish), the words we use are not a true record of the reality that we are looking at, they are ‘motivated signs’ – and the meaning is only within the sign. Bel was recording Trish‘s ramblings: ‘There was a movement among painters away from attempts to paint realistically; you know – figuratively. I think this was due to a distrust, because they thought that this kind of “realism” pretended that it knew what the world was like…’

Good morning Cyril,
have read all the photographers’ essays in this book

you’ve lent me. I like Lucien Clergue best for his prioritisation – even above setting up the cameras – of his relationship with the model. “Both the model and I may be completely exhausted at the end of a session, but it’s a good kind of exhaustion”

. He says that, when photographing the model, he is completely content. Some of the others in this book – they couldn’t give a toss about the model as a human being. Can’t write more, Bel is just bringing through our elevenses.
Suki

Days have gone by with no proper conversation with Bel. Not my fault. If she talked, I’d talk. What’s the story of her child? Why is Elise in a psychiatric hospital?
Then this morning, over our tea-break, a conversation happens.
‘Your turn.’ She sets down two cups of English tea on my desk in the bedroom. ‘Why are you really here?’ She settles on the bed. ‘I mean, it’s not all about writing your novel, is it.’
The question is chilling. I shiver. The January weather, too, is chilly. Humidity, when the temperature drops and there is no adequate indoor heater, gets into your very bones. Could I make Bel happy by saying I came to Shanghai to be with you?
But I have to be honest. ‘Um. Okay, I’m avoiding my unsuccessful life.’
Bel reaches over, squeezes my arm (it’s always a shock when we touch): ‘Still on your quest,’ she says, generously.
‘Actually, you know, something’s started haunting me – I mean, being here, with time to reflect: I keep reading articles about women giving birth at fifty. Ageing first-time mums are all over the news. If you’ve got enough money you can make it happen.’
‘God. Materialism in extremis.’
‘But I’m jealous.’
‘Look, Suki. Being a parent can ruin your life. And that’s even people like us with all the benefits and support of living in the West. Wait’ – she leaves the room.
Is she going to show me something to do with Elise? Photos? But she returns with – oh god – not another article, which she urgently skim-reads, then summarises:
‘Listen: tens of millions of poor people in countries like Nigeria, India, Pakistan and Peru can only afford to eat for five days each week. Most of the world is exhausting its ground water because of overpumping… la la la…’ – she skims down – ‘…yields are flat-lining in Japan… Here! In northern and Western China, and the Sahel region of Africa which is an area wracked by insurgency and conflict, people are running out of land to grow food. Millions of acres the world over are turning into wasteland because of over-farming and over-grazing!’
‘It sounds a bit sensationalist, Bel. I wouldn’t just take it all as read.’
‘This American scientist Lester Brown who’s never been wrong about any prediction is saying it.’
‘Look, just don’t worry about big stuff, Bel. Enjoy little stuff. This cup of tea.’
But Bel has dropped back into her default mode.
I’m rubbish at dealing with my own depression, never mind hers.

Evening. It is a relief to go out of the flat for the second session at Trish and Mike Little’s place. A good distraction for Bel.
Video-camera in hand, she unobtrusively gets to work.
‘Is your neck ok?’ Mike fusses over me, supervising my positions. ‘Are you warm enough? Do you want to sit in that chair? We’ll have a cake break in a bit. Happy days!’ Then gets on again with his pedantic, conscientious photographing.
Trish bumbles about, switching different spotlights on and off, shifting her projector to create new shapes on my body. ‘I’ve been getting my ideas from this Swiss guy Saussure, who advocated “the detachment of the sign from the referent”. Are you with me? It’s all ever so difficult…’
‘Clever, isn’t she,’ Mike grins indulgently. He takes another careful photograph. And another. And all the while, Bel – gifted photo-journalist and film-maker extraordinaire – sidles around us, doing what she is brilliant at; a silent presence, close to the room’s walls, by necessity an outsider, recording it all with her unique eye.