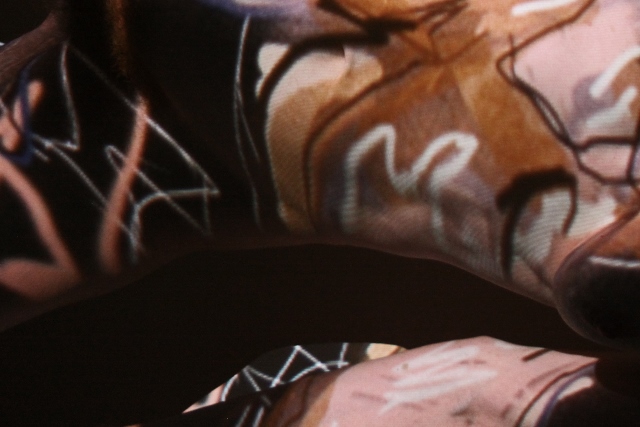 Mike Little’s photo of one of his wife Trish’s drawings, projected by her onto my skin. Bel’s movie of this unfolding project is almost complete.
A final session with Trish: the culmination of her chaotic art project.
We leave the still-empty campus (Spring Festival goes on and on…) to go to the Littles’ apartment. Our suburb, too, is still a ghost-town. The urban population, recently-migrated from the countryside to settle on Shanghai’s new-built outskirts, has left en masse to return to home villages.
At this annual gathering, do Chinese families fight? Like British families do at Christmas?
With her project climaxing, Trish is dizzier than ever:
‘…because trying to reproduce an image that you see in a photographic or so-called “realistic” way is about certainty, but there is no certainty.’
‘As in, nothing can be taken literally?’ I clarify.
‘That’s it!’
I shudder. ‘That’s how Shanghai makes me feel.’
‘We’ve moved away from the whole of the body’ – Trish points excitedly at an image on her monitor, ‘there – to focus on only a part of the body; hence we’ve moved from what is obviously a referent, to something which has lost that referent.’
‘So you can no longer tell it’s anything to do with a body.’
‘Exactly.’
‘Like these,’ pipes Mike, holding out his smart-phone. ‘Edward Weston’s nude studies. I’ve got the Francine Prose book

that has a chapter on him.’ He shows me a couple of photographs.
‘Yes, I’ve seen some of these. And they get compared with his vegetable studies, like that one of a pepper that could equally be a woman’s torso.’
Mike holds out the phone to his wife. ‘This the type of thing you’re on about, sweetheart? See – you can hardly tell whether they’re bodies or objects. It’s abstracted from what it really is.’
‘Technically clever – yes.’ Bel moves forward into the group from her silent observation-point. ‘But the great Stieglitz himself disliked Weston’s photography for that reason. It was all about technical prowess but totally devoid of artistic vision. Plus there’s no feeling in them. Even though they were often the body of Charis his lover.’
‘But they’re good, though,’ Mike insists. ‘They fox you into thinking they’re something else.’
Trish, behind him, looks pained. ‘Haven’t you baked something for us, Mike?’
‘Sorry Trish, are we ready for tea?’ Mike heads for the kitchen.
She sighs and flops in front of her monitor. ‘Wish I could talk to someone about my ideas. Wish I was more confident. Always feel I’m waffling, being a nuisance…’ She absently drops her mouse into the pocket of her fisherman’s smock. ‘Most people don’t listen to me like you two do.’ Is that an oblique comment on Mike? ‘Anyway,’ Trish yanks at the nest of coffee tables – ‘enough of me and my rubbish.’

From beyond the Littles’ Ikea curtains comes the constant, alien clamour of Shanghai’s Jing ‘an Temple district. Apart from sharing the ear-plague of incessant fire-crackers, we have no connection with the lives of the Chinese around us at this festival time. Within this apartment, we are in England.
Mike is holding out a cup of tea. ‘So, Suki, do you think there’s any difference in how artists relate to their models, compared to Art Nude photographers and their models? After all, you’re the one with first-hand experience.’
‘Yes, there’s a fundamental difference.’ I take the cup and saucer. ‘Art Nude photography is dependent on the photographer’s personality and his or her connection with an individual model. A photographer can only produce Art Nude work if he or she has managed to get into a working relationship with a person who’ll pose naked one-to-one. Though of course, working with you two guys breaks this mould because it’s two-to-one.’
‘Three-to-one’ – Mike shoots a look at Bel, a silent island in an armchair: ‘technically there have been three of us making pictures of you.’
‘Well, okay, yes. Complicated, isn’t it! But I would say, really – Trish – this is primarily about your relationship as a creative artist with me as the model.’
Mike gives Bel a wide encouraging grin; tries to draw her in: ‘It’s quite complex in the case of our little project, here, isn’t it? As the photographer I myself am merely observing the primary relationship – which is the artist-model relationship – and recording images of its fruits…’
‘But your photos are slanted, Mike. Not objective,’ says Bel gravely. ‘The photographer’s eye inevitably has an interpretative dimension.’
‘Accepted!’ Mike beams. ‘Whereas you, Bel, as a film-maker, are documenting all of our inter-relationships completely neutrally.’
‘Nothing’s ever “neutral”,’ I pipe up, without forethought – ‘I mean, the documenting of my Shibari sessions by a photographer was still shaped by his aesthetic. He was still selecting images.’
Mike pauses from reaching some floral tea plates out of a sideboard. ‘What’s Shibari?’
‘Oh. Ah… It’s this traditional Japanese type thing… where one gets tied up…’
‘Ooh!’ Trish’s eyes shine, while English embarrassment turns Mike’s face pink.
‘It’s a kind of meditational practice really,’ I bluster. ‘The knots have to be really beautifully done. It’s more about the process…’
‘Bondage!’ Trish giggles.
‘Uff… Like I said it’s very much an aesthetic thing, mainly…’
‘How about some bondage, Mike?’ She reaches to take the cake-tray from him.
I crash on – ‘…I mean, the bondage masters are quite nerdy actually, trying to get their knots absolutely perfect and symmetrical and everything’ – I see Mike is flustered, removing his pinny – ‘It’s more like macramé than anything else.’
‘Oh?’ Mike’s face brightens. ‘I used to be really into macramé. Do you remember macramé owls?’
‘Oh cripes, yes, macramé owls’ – Trish rolls her eyes – ‘nineteen-seventies. They were everywhere.’ She plonks the tray onto the coffee table. ‘Gosh, this looks lovely, sweetheart.’
Mike raises his merry eyebrows at me. ‘Carrot cake?’