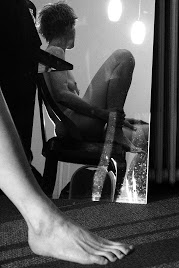 Greg-I’m-a-Kiwi says this photo is après Duane Michals. Most of Michals’ work isn’t Art Nude; he worked as a fashion photographer on Vogue etc. Also, a lot of Michals’ photographs have a hinted-at, if not strong, narrative, which is what Greg has aimed for in this photo. Greg experiments with interesting settings or situations for nudes; stuff that suggests a back-story. And perhaps due to being in the Orient, he has got into – of all things – paper-cuts.

Dear Artists and friends of Bel! Party at Qi Qi’s Café Bar, tomoz 8pm, to launch Bel’s fantastic ‘Qi Qi’s Life-room’ movie – some of you are its stars! Be there or be square! All welcome, pls spread word. Suki x

It’s a full turn-out.
Mike Little has chipped in with champagne and canapés, and has got some press representatives to come along. Trish has over-excitedly parcelled her bulky form into a black satin evening gown topped off with a net-festooned purple hat. Besides Greg-I’m-a-Kiwi and his artist friends there are half a dozen Art Nude group members, including Cyril, who inevitably heard on the grapevine, plus a bunch of Fei Mo Di’s designer friends and Alvira, Wei Wei, Qi Qi, Lily Hong…
Where’s Bel? Everyone asks. It feels strangely like a Bel memorial event.
Lily Hong pats my arm, as though comforting me: ‘She come back soon. Three days.’
As if I’m not counting.
How ironic, that a circle of international arty friends seems to have crystallized since Bel left.
Could I stay on here, after all?

Midnight. A drunken conversation between die-hards Cyril and Greg-I’m-a-Kiwi who are propping up the bar. The talk meanders around photographers, sex, relationships, sex.
‘…Whereas Lee Miller, being both model and photographer, is totally outside the box.’ Greg drains another pint of Vedett Extra Blond. ‘She’s hard to categorize. Like, I totally agree with the photographer Duane Michals, that the nude figure implies both vulnerability and sex; but Miller, as a woman – whether as nude model, or as photographer of women – well…’ he sets down his glass – ‘she may not have seen either vulnerability or sex as part of the equation.’
‘Vulnerability and sex?’ I knock back the rest of my glass. ‘She’d certainly have disagreed with you about sex being automatically implied by nudity. Nakedness can be so unsexy. As for vulnerability – in my experience there’s a paradoxical combination in nudity of both vulnerability and strength.’
Cyril is hunched over a Jack Daniels. ‘I share Michal’s view that the photographer of the nude is intensely aware of the presence of the body and is taking pleasure in looking at the body.’
‘Ha – honesty at last!’ I stab a finger at Cyril. ‘You’re motivated by sex, not Art.’
‘I’m simply quoting Michal’s words.’ Drunk, Aussie Cyril reveals a totally different side of himself. Assertive. ‘The viewer of the nude inevitably “responds out of a sexual curiosity”.’
‘Rubbish. That would mean, no gay guy would be motivated to photograph a female nude. So Robert Mapplethorpe disproves that, for a start.’
‘That pervert,’ Cyril snorts.
‘I think Michals was gay,’ Greg chips in. ‘He produced at least one gay-themed picture-series.’
I gulp my wine (fourth glass). ‘To get back to Lee Miller – did you know she was into polyamory before the term had even been coined? As in, she actively encouraged her lovers to have other lovers.’
‘Loada crap,’ Cyril growls from his corner.
‘And obviously she didn’t expect her lovers to have a problem with her sleeping with others.’
‘My second wife was full of that shit.’
‘Well, I personally would like the kind of marriage Lee had with Roland Penrose

. They let each other sleep with whoever they wanted.’
Cyril knocks back his whisky. ‘As a matter of fact, the agreement between Lee and Penrose was that their love for each other would remain “sacred” – as in, they would be absolutely faithful in that respect. They just permitted each other to sleep around. Which is still a loada crap.’ Cyril looks directly at me. ‘I mean, what does wife mean, if not “belongs to husband”?’
I look directly back at him: elderly, fat, slumped; his chin almost resting on the bar.

Dring dring!
Eight a.m., the sun too bright. Jeezus. I crawl from bed to answer the landline. It’s Lily Hong.
‘Oh. Lily. Think my head’s going to explode. How’s yours?’
‘Miss Suki, please come now. We wait you in Foreign Affairs Office.’
Lily Hong stands up when I walk in, her lip trembling at me like a little girl’s. The Director of Foreign Affairs gently tells me they have received news that my colleague Bel is ‘deceased’.

I am then left for some time.

The office is very simple.

After a while, green tea is served.

It is late evening when I finally get a message to your brother. I have to go on your laptop – sorry – and look in your contacts for his email address.
John.

It takes him more than 24 hours to reply.