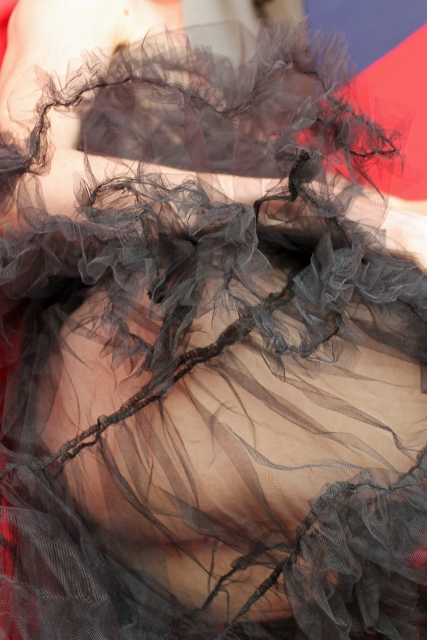 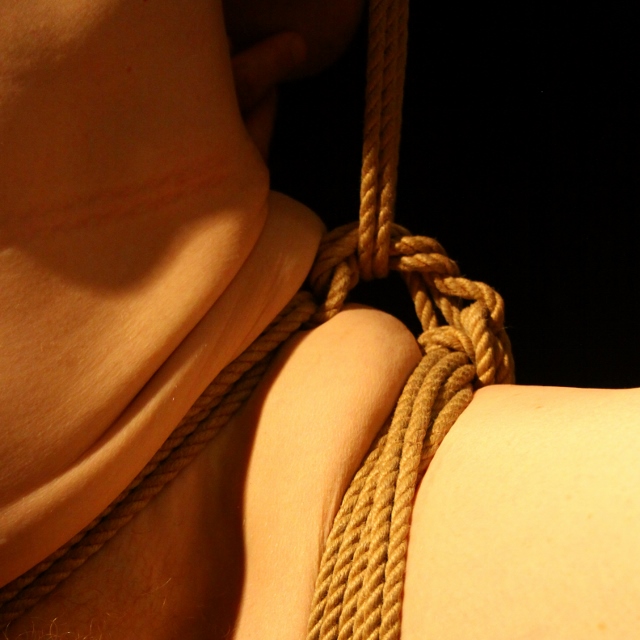 I love the textures in this picture. Last night I sneaked off to the session with a Shanghainese Shibari bondage master arranged by Tamara’s photographer pal, Hong Kong Ron. Turns out he hasn’t just randomly popped up again in Shanghai. Tamara paid his flight as well as his fee. And the rigger’s fee.
Friday afternoon. The pollution is soaring. Very unhealthy: increased aggravation of heart and lung disease and heightened risk of premature mortality in people with cardiopulmonary disease and the elderly. Reduced exercise tolerance in people with heart disease due to increased cardiovascular symptoms such as chest pain.

When Bel walks in,coughing hard, from her afternoon class, I’m at the window.
[splutter] ‘What are you doing?’
‘Thinking. Nothing. Look at that filthy air.’ I don’t say – One year ago today I gave birth.
‘The students say Shanghai’s no way as bad as Beijing.’ She drops her briefcase and immediately goes through, spluttering, to lie on her bed.
Today is technically Bel’s third day of mourning. Two dead children are in the apartment with us. But we are silent on this topic. Today is also, I work out, exactly five months since the start of my life in Shanghai with this impenetrable, unhappy woman who is increasingly these days wracked by terrible coughing fits.
I continue to stare, unseeing, out of the window. How could either of us stay here for ever? We can’t speak the language. There is no outlet for my work here. I can’t do poetry readings. I can’t share poetry. And internet censorship blocks out my world. What has Shanghai done for me? What am I now?

a) a writer and poet?

b) an art-nude photographic model (hobbies Shibari bondage and writing)?

If the latter, should I grab Cyril‘s marriage proposal and exchange exhilarating, dangerous, unstable, polluted Shanghai (and Bel…) for his native Melbourne?
Aussie Cyril, or Bel? Edifying conversations about Art, or depressing daily bulletins about the end of the world?
Would Cyril want me to whip him and lead him about by a chain? But might the material benefits amply compensate for having to do this – e.g. is Cyril rich enough to buy me a baby? Could he make me an ageing first-time mum?
Cyril vs Bel. God. Rock and a hard place. Unless – might Bel change? Get happy? Could we ever get… close?
Sigh. What other options do I have?

I deliver a cup of tea to Bel wheezing asthmatically in her bed. I want to talk about our children. There are two elephants in the room. But Bel is closed off, scowling into her iPad.
So I sit at my desk, check my inbox.
One new email. Tamara.

Hi – just got Hong Kong Ron’s fantastic photos from last night’s session. Guy I booked to do rigging tip-top! Learned his craft in Japan. You’ll like this Japanese photographer Nobuyoshi Araki – pics of incapacitated women – his aim is, free women’s souls by tying up their bodies. Says his images not depiction of a woman but of his relationship with her, and that his images are intended to empower women.
Soz for long silence my end, Dad getting poorly.

Tamara is so bloody brilliant at making things happen for me. Or should I say – to me. Is returning to Blighty and crashing indefinitely at her designer apartment my best option?
But…
The thing about marriage is, it’s SECURE. No financial worries, ever again. Secure, secure… When was I ever?

Bel, emerging from the toilet, spots an Araki image over my shoulder. ‘You still into bondage?’
Does this mean she’s up for talking? ‘Yes. It fascinates me. At least, looking at images of it.’
‘Araki’s got a terrible reputation; he’s mostly written off as a pure pornographer.’
‘Oh, but it’s not ‘real’; it’s stylised enactments of power roles. I find it aesthetically pleasing. Being tied up is just symbolic…’
Bel has gone to poke among her stacked-up books. ‘I bet you don’t know that Lee Miller did sub-dom role-play with Man Ray.’ She starts leafing through the biography

. ‘In about 1933 they were spotted in Montparnasse connected by a gold chain. Here: “the woman was taller than the man and strode along in spite of being tethered”. The person who saw them said it was obvious he was more attached to her than her to him. Huh. Lee would’ve been rubbish at being a subordinate.’
I see an opportunity. ‘D’you think Lee Miller

was inured to death?’ – I’ve cleverly managed to bring up the ‘d’-word – ‘Like, didn’t feel anything about it?’
Bel’s face snaps shut. ‘No. Why?’
‘Well, she seemed so unfeeling. Even before she saw all the blood and guts in the war.’
‘I don’t know what you mean.’
‘Well, for example, why wasn’t she affected by the suicide of her fellow-model, the beautiful Nimet – considering she may well have played a role? I mean, it happened soon after Lee started shagging Aziz – Nimet’s husband, the old Egyptian guy – which was pretty treacherous of Lee, especially when she’d photographed Nimet herself, which shows they definitely knew each other socially. Could it have been to do with the rape when Lee was seven? Childhood trauma? Like, she learned to just blank people out? No empathy?’
But Bel is now answering her phone. Brother, she mouths, and goes out onto the balcony, leaving me staring at the page about Lee Miller

.
Should I just give up on trying to live with Bel?
What on this earth induced me to come to Shanghai? If I had known there would be days like today – our flat nightmarishly patrolled by two ghost children…

If someone would only take the reins of my stupid life out of my hands, I would submit to their every wish.