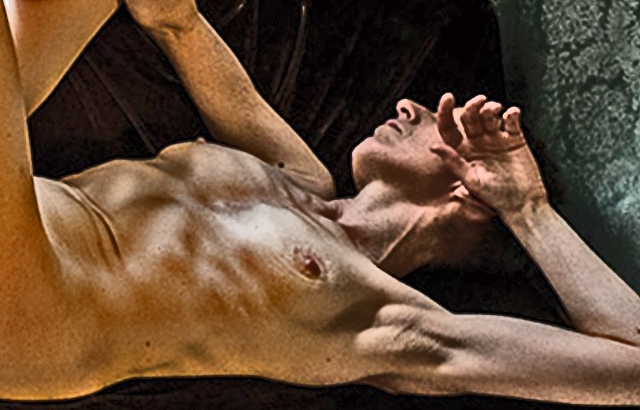 I may seem obsessed with Schiele

’s and Freud’s sexually explicit poses. Really it’s a case of being fascinated by the issues they throw up. In this photo by Aussie Cyril (from our second M50 session yesterday) I’m in a pose I copied from a Lucian Freud painting. I’ve over-photoshopped it, trying to make it look textured like the painting. Art critic William Boyd associates the two artists (he refers to ‘the disturbing power of … a Lucian Freud’) in an article primarily about the ‘sexual frankness’ of the chronologically much earlier Egon Schiele, whose notorious explicit nude studies were a ‘visceral shock to pre-First World War viewers’. Way ahead of his time, and condemned by many as obscene, the young Schiele endeavoured to “strip away the lies and surface pretences” of social hypocrisy – the repressive values and attitudes that prevailed at the beginning of the 20th century in Vienna and Europe-wide. Even today, many would be deeply shocked if I, as a life model, copied certain of Schiele’s famous poses. I can’t think of a single artist acquaintance who would be blasé about drawing me masturbating. Is this a case of similar “repressive values and attitudes” prevailing even nowadays?
Sunday. Two days since the end of exam week. End of semester. The campus is already eerily quiet, the students having left to join the national hordes flocking home for Spring Festival. So – at last – a chance for us to talk?
It is end-of-January freezing and I am under my duvet, re-reading William Boyd’s Guardian article about Schiele and erotica. I turn to Bel. ‘Does copying Egon Schiele

. That’s why every student in every college class I’ve ever modelled for is a Schiele devotee. He only drew the body-parts he was into. Never mind the head or the feet, straight to the genitals.’
Bel actually grins.
‘The only place masturbation’s permissible in a school is in the Schiele catalogue

in the art room.’ Ping! ‘Oops, excuse me – a text.’
Bel instantly puts her head back into her marking. Darn. I love that we’re chatting about Art.
I take a look. ‘Poo. Cyril. He wants to “continue our discussion of Picasso”.’
Bel doesn’t look up. ‘Never stops asking you for dates, these days. You should go. Why not get a free meal out?’
‘For heaven’s sake, Bel, I don’t want to socialise with Cyril.’
Bel raises her eyes from the exam papers, looks quizzically at me.
‘Quite frankly I’d rather discuss Picasso with you. I’d rather discuss anything with you.’
‘Go on, then,’ she sits back – ‘I’m bored of this.’
‘Oh! right – well: Cyril’s in total agreement with that feminist mad-woman Karen Kleinfelder

are about male sexual power over women. You know. The fantasy of possession of the model. But there’s this other academic Marie-Laure Bernadac, who says those works are just – wait, let me quote: “a later-life exploration of the female realm.” As in, not exploitative at all.’
‘Or at least, not that specifically,’ Bel agrees. ‘And anyway, I always wonder – what’s actually wrong with artworks that show a power relationship – a sexual relationship – between male and female?’
‘Exactly my question! Why is Kleinfelder

so derangedly angry with Picasso

for relating to women sexually?’
Bel shrugs. ‘I’ve never actually understood why artists having sex with models is a problem.’
‘Me neither. I mean, which way is the exploitation, in the end? Isn’t there a tradition of on-the-face-of-it ‘subordinate’ female secretaries exploiting their rich bosses for their own ends, by manipulating them with sex?’ I get out of bed. ‘Cuppa tea?’ Heading for the kitchen, I call – ‘Traditionally, surely most artists’ models would have been expecting it to get sexual?’
I don’t hear a response.
I come back from switching the kettle on – ‘I mean, Schiele’s so-called muse Wally Neuzil: she was integral to his life. His primary relationship. Can’t we assume it was mutually beneficial? Why insist on calling it exploitation?’
‘Maybe.’
‘Like, I’m sure Lee Miller fully intended her relationship with Man Ray

to be sexual.’
‘Well of course, she’s a person who’d only have sex if she wanted to…’ Bel ponders for a moment, ‘though anyway she was working more with photographers than artists. I think there might be more likelihood of sex between photographer and model than artist and model, considering that with photography there’s much more one-to-one work.’
‘I think that’s definitely the case. Like, you know Charis Wilson, Edward Weston’s ‘muse’ who became his second wife? She expected sex with him from the outset. It was Charis who brought it about. Let me get Cyril’s book…’ I scoot to fetch it from the living room.
Maybe we’ll go on being like this from now on? Maybe I could stay on with Bel after all?
Should I get into her bed?
I dive back into my own bed with the book

. ‘It says here that the very first time Charis modelled for Edward there was a sexual tension that “had to be diffused with breathless conversation” – and the second session, they had full-blown sex which she initiated herself – because he was apparently “shy” – by giving him a “very compelling look”. And he goes, “I felt a response…”‘
We both guffaw. ‘“Eyes don’t lie and she wore no mask… At last she lay there below me waiting, holding my eyes with hers.”’ Breaking off, I quip cheerfully, ‘Bel – is there anything we don’t agree on?’
‘That all men are bastards? Coz you seem very well-disposed towards Cyril.’
Why this sudden barb out of nowhere?
I do another guffaw, a bit over-hearty. ‘Obviously all men are bastards. And Cyril’s in the sub-category “fat bastards”. Speaking of which, listen to this: throughout Weston’s affair with Charis he also kept on a long-suffering and faithful wife in the background who was bringing up his four sons. Quote: “Poor Flora… I must try to be tender to her, it is not easy to thrust aside such a great love as she offers me”.’
We both go, ‘Bastard!’