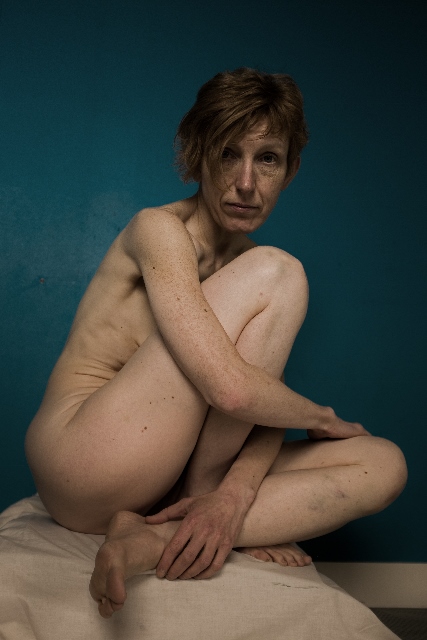 Another photo from the first Shanghai Art Nude Photographers group session. Aussie Cyril says it is apres the work of early photographer Ruth Bernhard. He has lectured in photography. He has a lot of knowledge.
I flounce up to Bel who is waiting, as arranged, on the China Art Museum steps. ‘Huh. Pompous git.’
‘Fei Mo Di?’ She puts out her cigarette, wheezing. ‘Your shoot didn’t go too well, then?’
‘He called Anaïs Nin a ‘spoiled upper-crust adulteress’. Why does she get treated with such contempt? Lee Miller doesn’t, even though her sexual conduct was just as liberated and controversial…’ I follow Bel through the museum’s entrance. ‘It’s because Anaïs Nin was a writer

, that’s why. Visual imagery is infinitely ambiguous – all about the viewer’s perception – whereas the written word is a record of a thing perceived, and furthermore, is the writer’s take on it – their analysis. So the writer is laid bare, and therefore more vulnerable to personal criticism.’
Zero response from Bel. Which is becoming usual. Does she think I talk rubbish? When a man ignores me I assume it’s coz he’s a sexist pig.
Do I talk rubbish?
The foyer is a huge modern space. A ruddy-faced immigrant from the countryside in cheap gaudy leggings shows Bel and I to her toddler, like pointing out cows in a field.
‘Maybe I talked too much.’
Bel hands me an English-language leaflet about the current exhibition. ‘Did you? That’s interesting. When you model for artists you never utter a word.’
‘But with a photographer there needs to be interaction, doesn’t there? To find the poses.’
Checking the leaflet’s map, Bel heads off. ‘What did you think of his penthouse?’
I hurry after her. ‘Oh my god. Space-age. Shiny high-tech everything. That whole district is so pristine, glittering, brand new. All those exclusive luxury tower blocks. Was there ever anything old there?’
‘Shanghai isn’t old. Pudong was all paddy fields twenty years ago. You should read JG Ballard

. He spent his formative years in wartime Shanghai

when it was pure anarchy, which is why everything he’s ever written has an apocalyptic undercurrent. That’s Shanghai. Those towers built for the elite remind me of his novel High-Rise

. They spook me.’
Why does Bel only get animated about climate change, wars, and the end of the world? I don’t like thinking about those things.
‘Anyway’ – I shift the subject back – ‘I don’t think he’ll book me again. He definitely didn’t fancy me, I know that much.’
‘Fei Mo Di? Apart from being twenty years younger than you he’s as gay as a French horn.’

We wander through the museum. Bel’s and other visitors’ pulled-off pollution-masks dangle against their chests, like surgeons taking coffee breaks.
I stop to field a Wechat message. ‘Hey – another one-to-one booking! Next week. That elderly Aussie, Cyril.’
‘Three times married.’
‘God, Bel, your ex-pat world is incestuous.’
‘He likes to submit to women. Apparently.’
‘How on earth do you…’ –
– ‘One of his ex-girlfriends told me.’ We have reached the central hall where the new exhibition is installed. Some are gigantic. ‘Look! This is the fantastic stuff I wanted to show you. There’s so much photography-based art here, of a kind you don’t see in Europe.’ Bel is again animated, and this time, for once, about something positive. Her sweeping arm takes in all the works: ‘This isn’t about photographs. Photographic techniques and media are merely tools in the creation of these works. This all goes way beyond the debate on whether a photograph can be considered art.’ Her enthusiasm is a wonderful relief. ‘I’m going to bring my students,’ she declares.
This is our best moment together since my arrival a fortnight ago: Bel actually being relaxed, enjoying something. I am so happy! I link my arm through hers. ‘So. When are you going to start your Art Nude

project with me?’
She immediately tightens a little. ‘When are you going to get out your unfinished manuscript?’